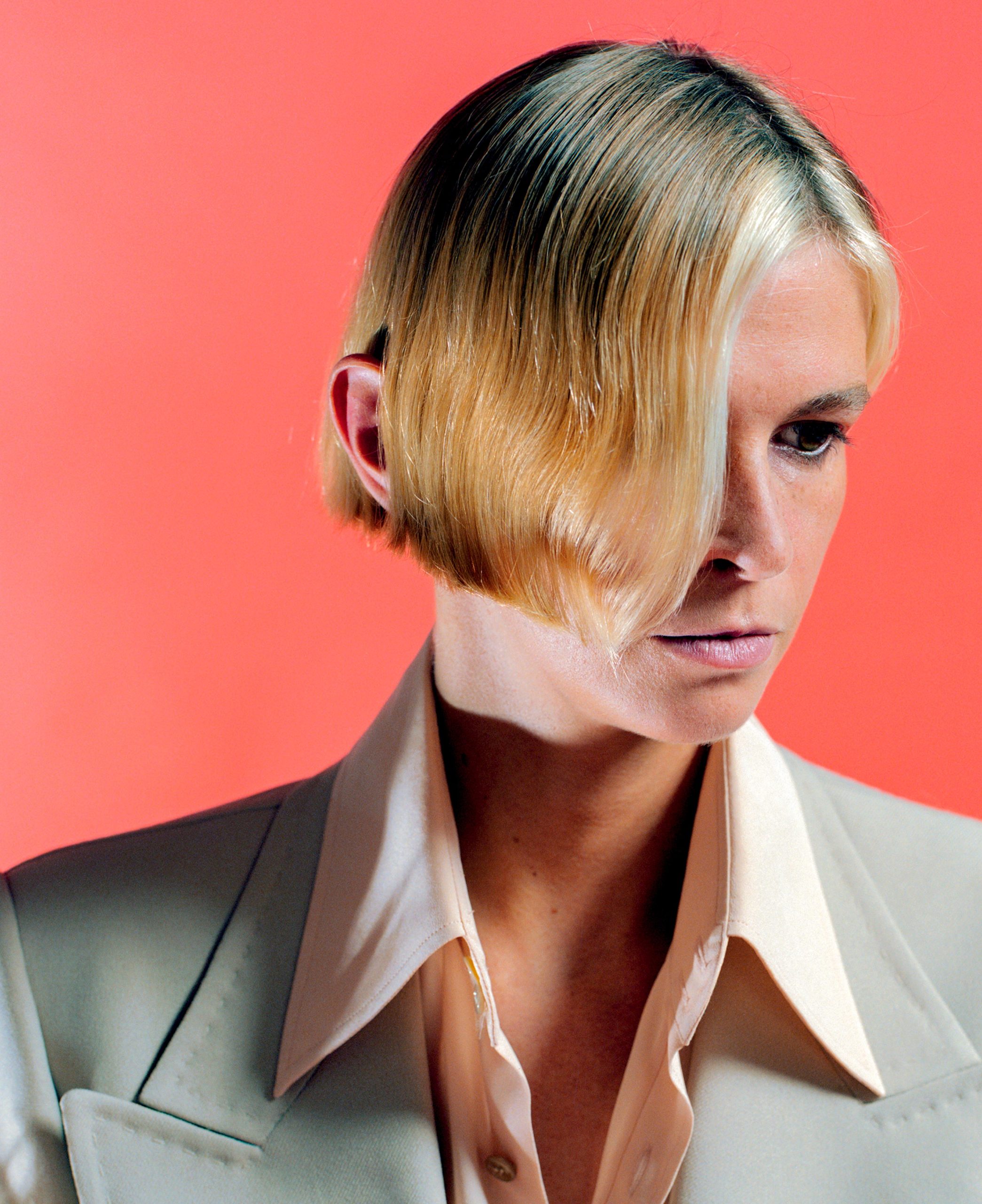 Sophie Varin is a young French artist whose work was exhibited in May 2022 at Studio des Acacias for the first group show of Reiffers Art Initiatives, entitled “DES CORPS LIBRES – Une jeune scène français”. Initially a fan of video and sculpture, she discovered painting at the end of her studies in Rotterdam. In her paintings, the body is both present and fleeting. Choosing the miniature, the artist creates works smaller than a postcard. 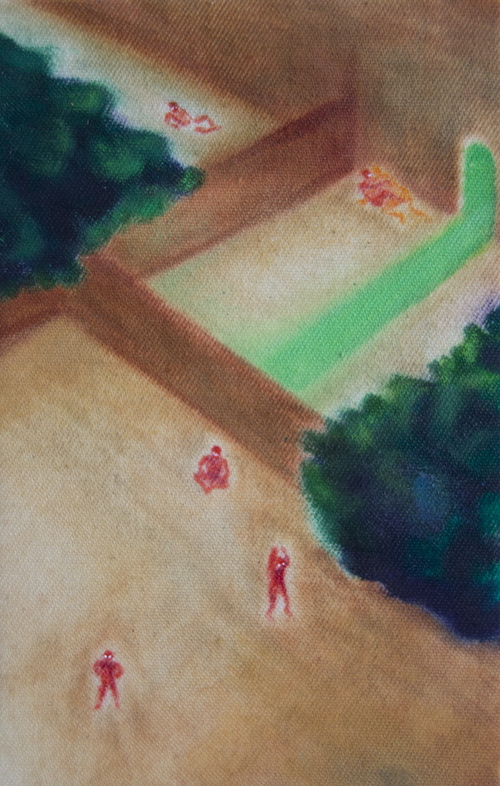 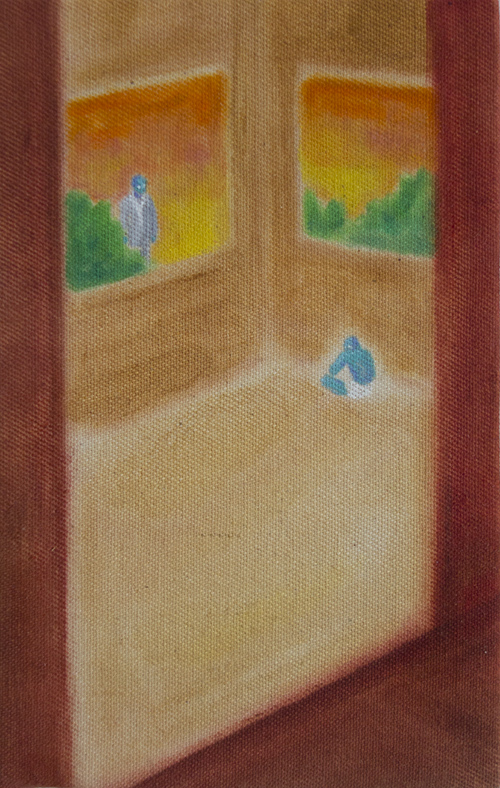 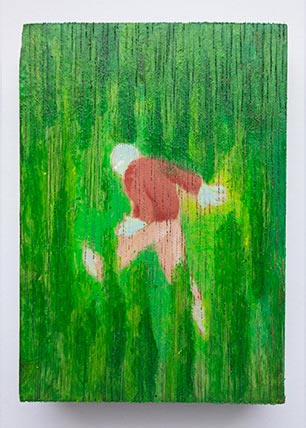 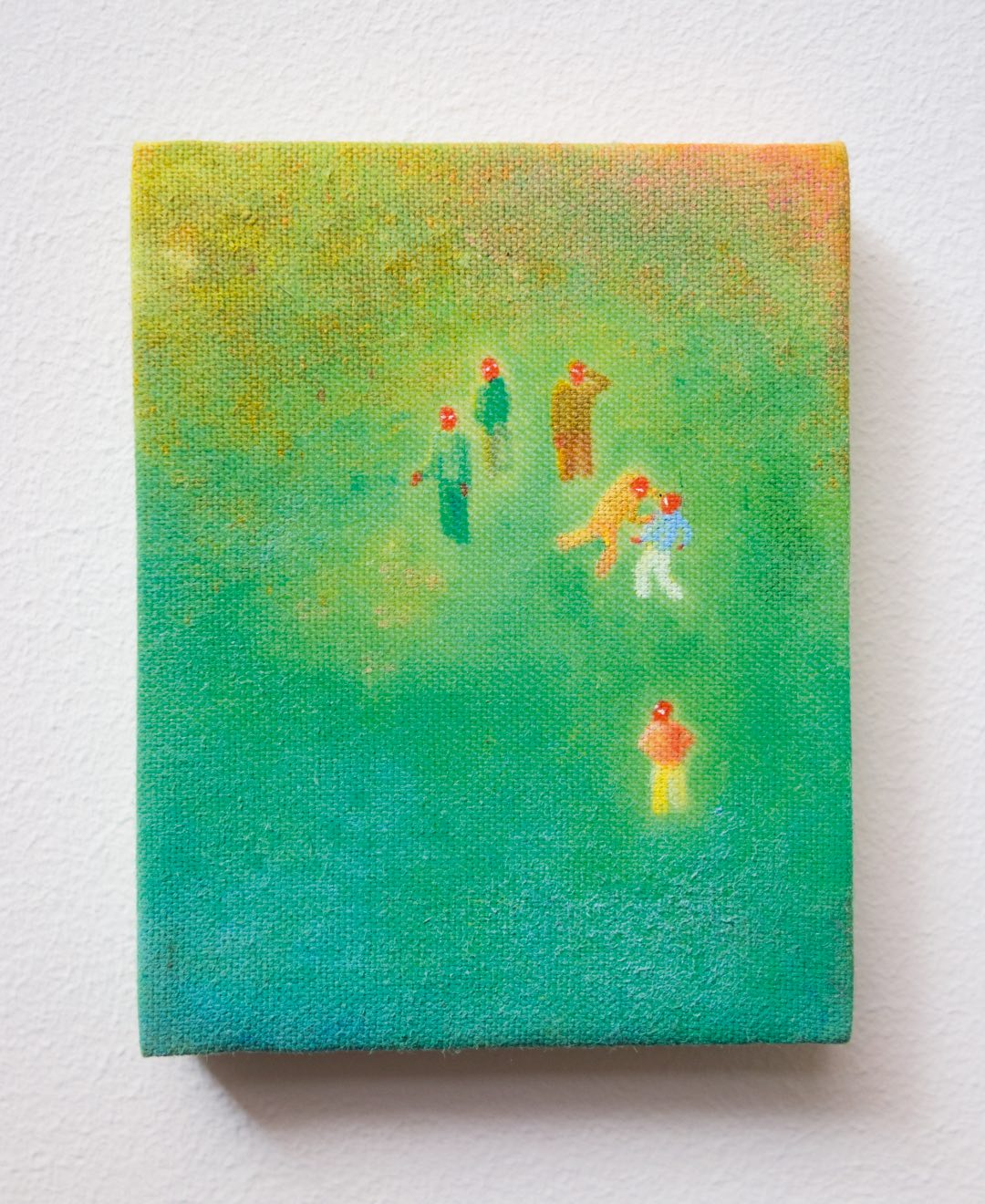 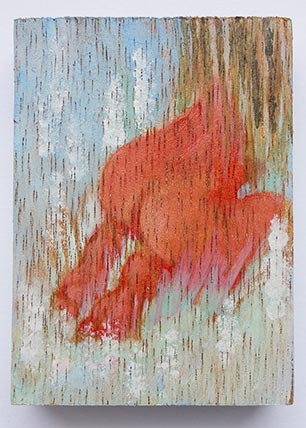 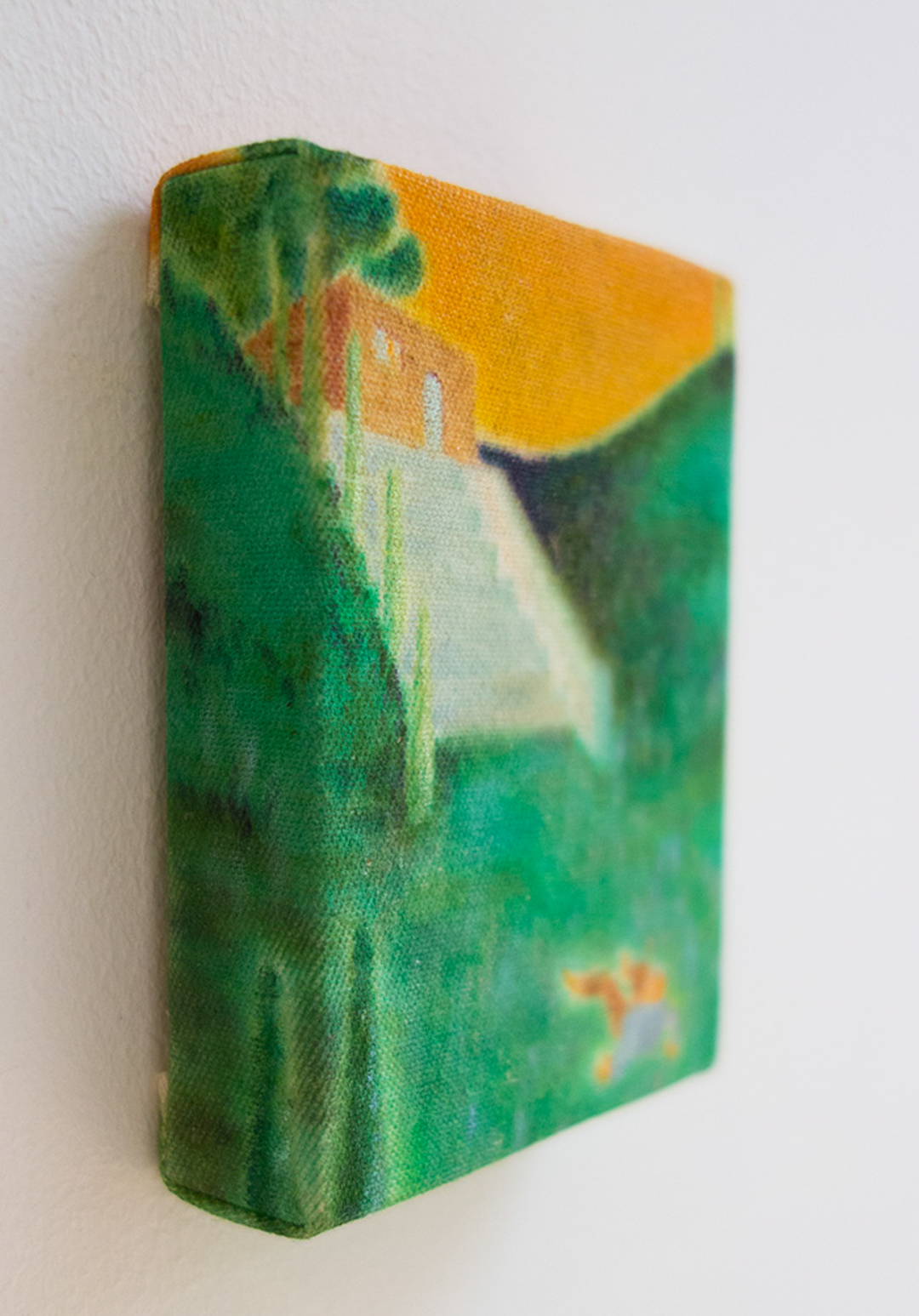 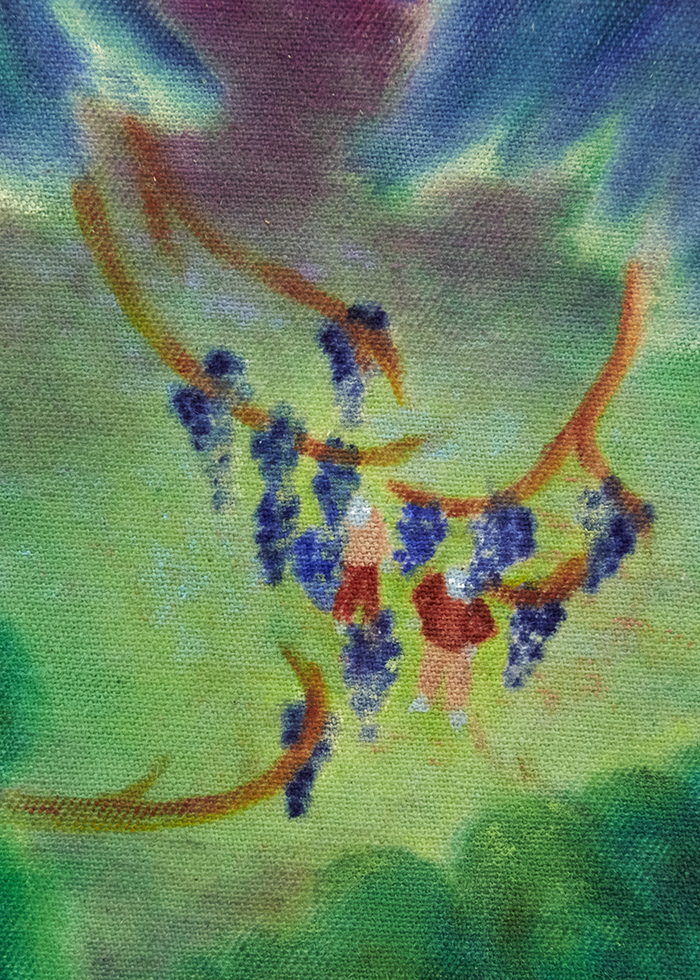 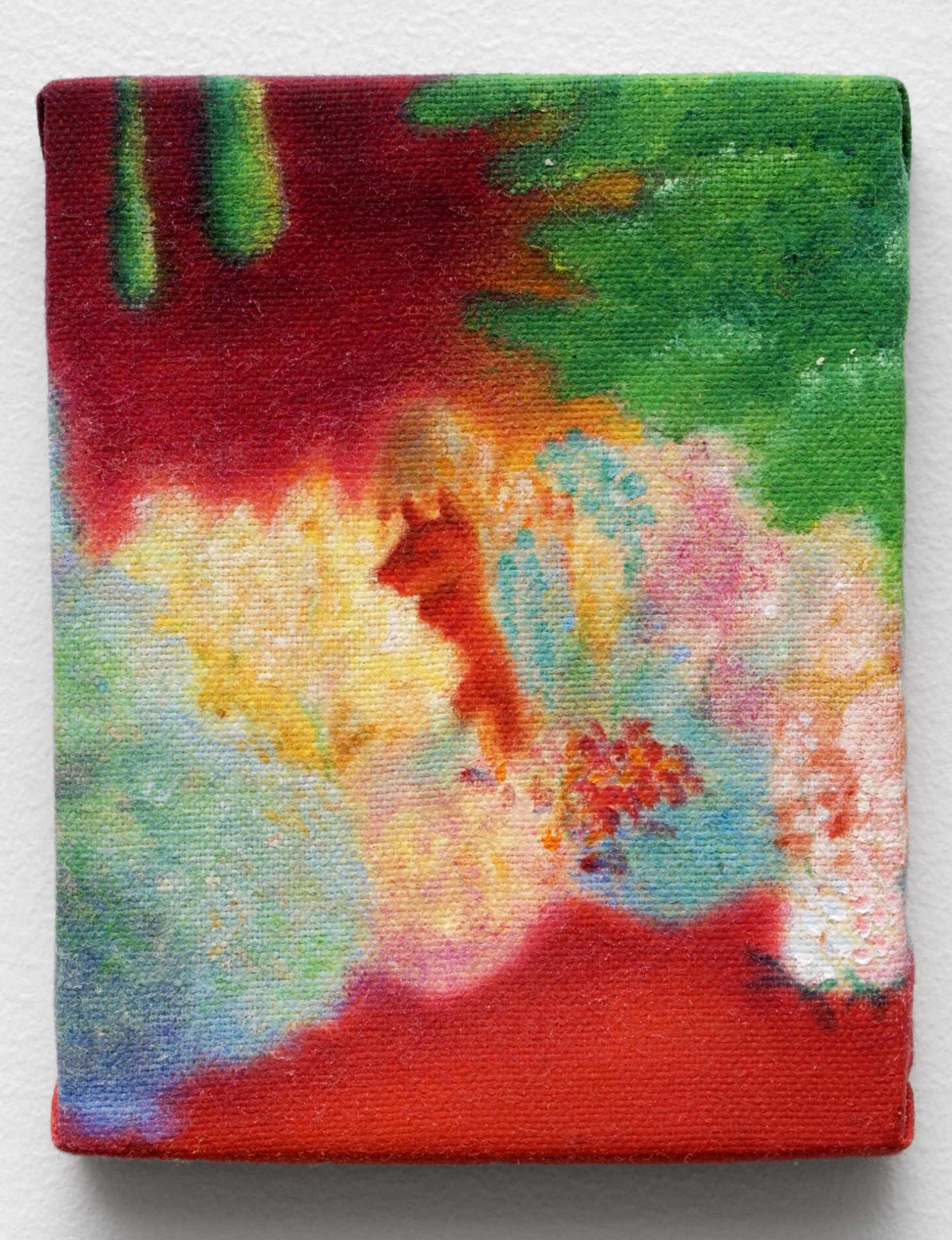 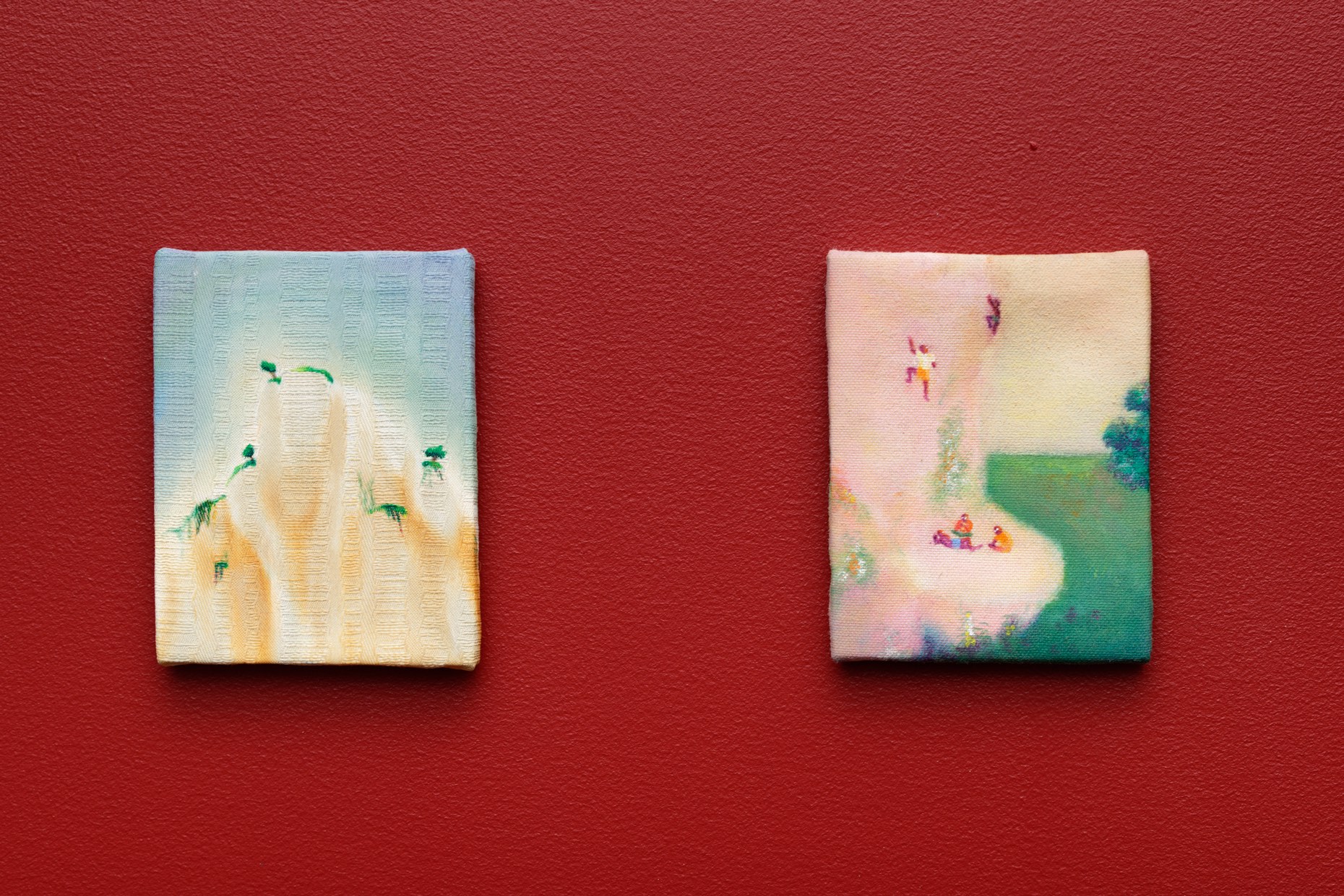 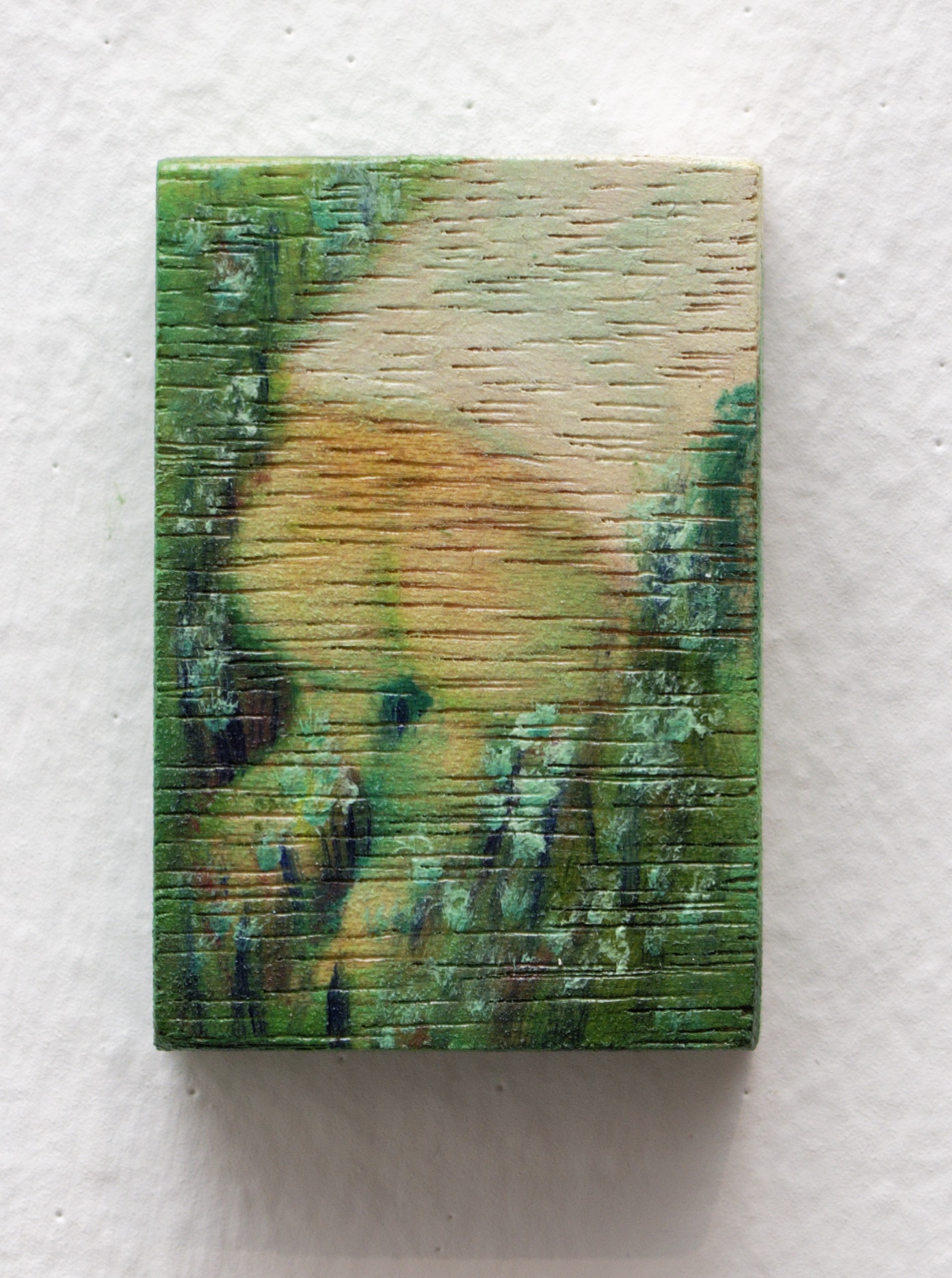 Her atmospheric painting represents silhouettes that stain this dreamlike setting,
surrounding themselves with luminous halos. In his paintings, the body is both present and fleeting. Choosing the miniature, the artist creates works smaller than a postcard and as apt as a smartphone to fit in our pocket.
This miniature format allows her to break with the reality of the authoritative body, freeing it from itself. The small characters become almost spectral apparitions where their bodies degenerate and disembody. The artist is represented by Galerie Sultanana, Paris.

“The miniature reveries of the painter Sophie Varin” by Matthieu Jacquet
— Numéro, 2021

“First a fan of video and sculpture, Sophie Varin discovered herself as a painter at the end of her studies in Rotterdam, imagining a short detective novel for her diploma which encouraged her to develop a more narrative practice. However, it would be inappropriate to read the paintings of the French artist as the sequences of a silent storyboard constructing a linear scenario. Each skit of the same series has in reality neither beginning nor end, and is only connected to its similar by the state of mind of its author during its realization. Impatient, the young woman produces them with immediacy and frenzy, in a single layer of oil that she dilutes on an unembedded canvas. The paint, moist and porous, deliberately applied with the help of large brushes, naturally shuns the sharpness of the line and halos his subjects with a diffused light. Humble in her practice, the young woman is no less greedy and invests all of her reduced supports, letting the color run from the edges to the back of her miniature frames."

“Sophie Varin’s oil miniatures are glimpses into a world full of intrigue and ambivalence” by Daniel Milroy Maher
— It’s Nince That, 2021

“For French artist Sophie Varin, her first foray into painting came later than most. After studying at the National School of Fine Arts in Paris, then at Hunter College in New York, and then finally at the Piet Zwart Institute in Rotterdam – all of which mostly revolved around sculpture – she stumbled upon this untapped medium. She can’t recall exactly how, but after writing a “detective story that dealt with fiction, plot and suspense” for her thesis, she felt the impulse to pick up a paintbrush.

The novel not only provided possible inspiration for her journey into painting, but the subject matter of her detective story evidently carried over into the work itself. Last year, in a show curated by Feeelings at the now permanently closed gallery Cunst-Link in Brussels, Sophie exhibited a collection of miniature oil paintings, alongside two sculptures and large painted fabrics. The oil paintings appear almost as visual manifestations of the story’s themes – intrigue and suspense fill the scenes depicted on the tiny canvases. Otherworldly settings are inhabited by unusual characters engaged in a mix of mundane and mysterious activities, from organising tables to bathing in pools to gathering around an unidentified source of light. Occasionally, they can be seen engaging with one another as well – talking, fighting, or simply staring – while elsewhere they sit in apparent solitude and we feel as though we are intruding on a private moment.”

“In medieval Europe, miniatures were small illustrations decorating books and codices of religious nature, sometimes depicting the everyday life of common people. These marginal, painted little spaces can now be seen as a glimpse of the scribe’s attitudes, hints of what they would think in their business of copying the canonical scriptures. If there was any individual perspective in the scribe’s head, a contemporary artistic interpretation, miniatures would illuminate it like an open window does a darkroom. Sophie Varin’s small scale paintings—her miniatures—are similar glimpses, also illuminating something that should not necessarily be illuminated.”